Some cities like Bruges, Rouen, and Sienna are locked into one architectural style.  Huge swings in economic prosperity followed by war or plague created these time-capsule cities preserving their perfect medieval core.  But this kind of preserved architectural purity can still happen!

Detailed railings and shutters at 44 Balfour St. make this one of the most decorative homes in the White City.

A huge wave of Jewish immigrants from Europe landed in Israel in the 1930’s.  Moving just North along the coast from Jaffa, these new residents build the city of Tel Aviv.  Skilled architects and brilliant modern designers created the city in the Bauhaus, or International Style.  Originally an industrial design ascetic which focused on pure lines, simplified geometric forms, and maximal utility, the Bauhaus concepts developed into a unique and thoroughly modern sytle.  Much of “old” Tel Aviv was built during this period which has resulted one of the most consistent modern architectural neighborhoods in the World.  In 2003 UNESCO recognized this so called “White City” as a World Heritage Site  For visitors, its a living museum of pure Bauhaus.

Because it was raining off and on while I was in Tel Aviv, I took an quick walk along the main streets of the White City to soak in the overall atmosphere rather than seek out the most famous Bauhaus architecture examples.  Starting from Allenby Street, I walked North up Rothschild Boulevard and then West along part of Dizengoff Street. With over 4,000 Bauhaus structures in downtown Tel Aviv, you can’t go far without finding interesting examples!

120 Rothschild Boulevard is done in classic Israeli white cream colored stone but has very modern balconies and window gaps on the front facade.

In today’s context, these buildings look familiar because we are use to modern architecture.  But think of how radical this must have been in the 1930’s.  It was a grand experiment in futurism to construct home after home in this wild unknown style.  Personified in its architecture, there must have been a vibrancy in this original neighborhood as its residents committed to creating a new city – both literally and figuratively.

Admiring the architecture, it’s easy to forget that these buildings are people’s homes!  Balconies with chairs, bicycles, flags, planters and laundry (even in the rain) were a great reminder.  The other big reality check was the obvious condition issues.  Many of the smaller and less elaborate buildings on Rothschild Street had cracks, facade damage, and were generally dirty.  The downside of so many historic homes is that they tend to age poorly and require deliberate preservation and careful restoration.

130 Rothschild Boulevard – One of many modern apartment buildings still in use and in need of some restoration.  Most of the  balconies are discolored and chipped.

The Bauhaus style continued to influence Tel Aviv’s architects through the 20th century.  You can find references to this ascetic in the modern and post-modern buildings that went up as Tel Aviv expanded.  Some of my favorite buildings were North of the Marina along Ha-Yarkon Street and a good walk from the Bauhaus core of the city.

Interesting architecture north of the marina at 214 Ha-Yarkon St 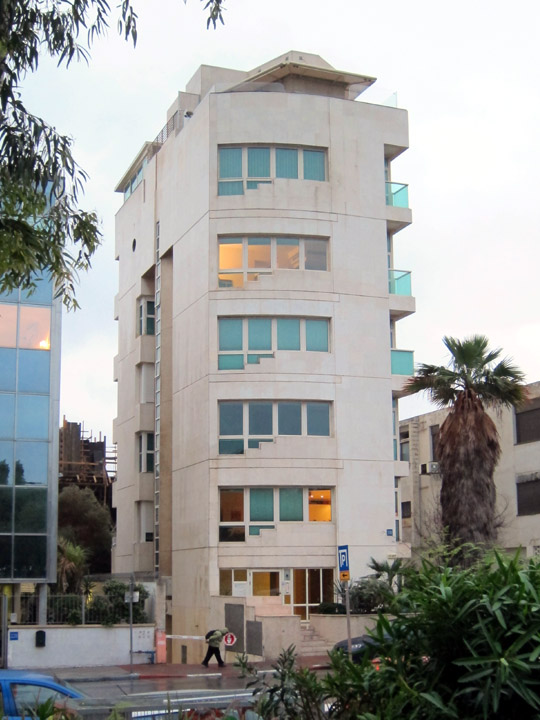 Where to find Bauhaus

If you’d like to explore the original Bauhaus buildings, make sure to visit Rothschild Boulevard, Shenkin, Dizengoff, Bialik, Mazeh, Kalisher and Yehuda Halevi Streets.  These have the bulk of the massive, ornate, and really unique buildings.

But if you want to soak in the atmosphere of the White City, then I definitely recommend walking without a set path in mind.  This entire area of the city was born in an era of exuberant and creative modernism and is almost completely constructed in the Bauhaus style.  While the polish is definitely gone from these aging structures, its fascinating to see the implementation of a radical new visual ascetic in the 1930’s that wasn’t embraced by the rest of the world for another 25 years.  The consistency and extent of the artistic experiment makes it worth exploring.