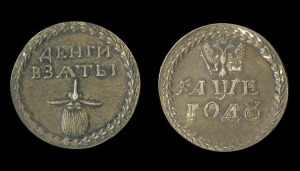 The monthly ArtSmart Roundtable brings together some of the best art-focused travel blogs to post on a common theme.  This month we are discussing Fashion!  Take a look at all the great stories at the bottom of the page.

A Monument to Peter the Great in Taganrog, Russia (Photo)

Peter the Great (1672 – 1725) is a legitimate candidate for the the Most Interesting Man in the World.  Physically impressive at 6 foot 8 inches tall, he disregarded his royal status and sought out hands-on experience with the military, international trade, and sailing technology.  Realizing this country needed an Atlantic shipping port, he planned and constructed St. Petersburg from absolutely nothing.  Peter I’s reign was a revolutionary time for Russia; he brought the nation from medieval neglect to the Age of Enlightenment.  Emblematic of the massive political and technological changes he made, Peter’s reforms included forcing Russians to completely update their wardrobe – which was not nearly as easy as it sounds.

Russia of the 17th century had changed little over the last 600 years.  The Tsar was supported by a ruling class of nobles (or boyars) who gained their wealth largely at the expense of a massive, enslaved serf population.  This feudal system worked in concert with the powerful Orthodox church headed by the Patriarch.  Whether they were ready for them or not, Europe’s rapid advances in technology and trade finally brought outsiders to Russia in the 17th century.  At the time of Peter’s birth in 1672, there was a community of merchants and ambassadors from Germany, the Netherlands and the British Isles in Moscow.  Drawing the suspicion of local, these foreigners lived separately in their own neighborhood. 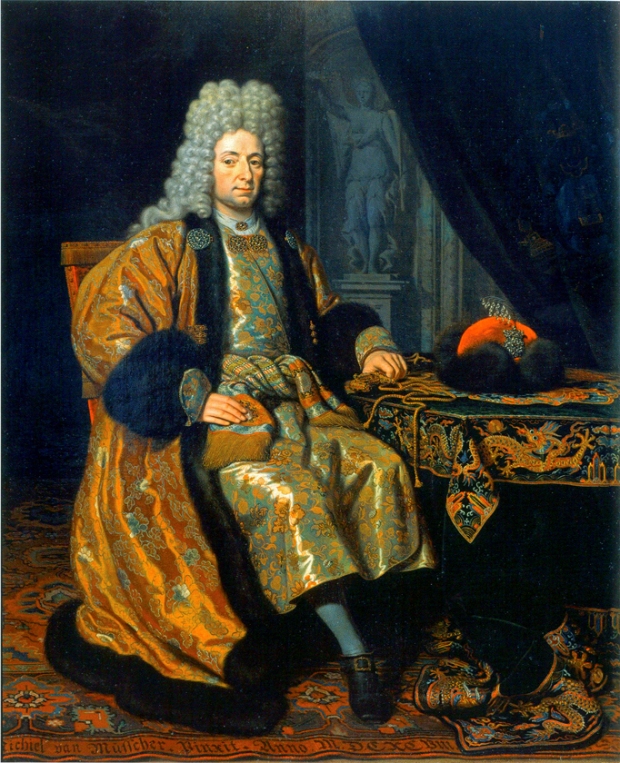 Swiss-born Franz Lefort came to Russia as a mercenary in the 1670’s. He eventually became one of Peter’s most trusted advisers. Here he is shown in a Russian costume (but with French wig and shoes) during Peter’s trip to the Netherlands. “Portrait of François Lefort” by Michiel van Musscher, 1698 (Image)

Peter’s mother Natalya, the future second wife of Tsar Alexis I, had been sent to Moscow by her family and was raised by a progressive, Western leaning boyar and his Scottish wife.  As a result of her education, Natalya ensured that Peter was taught mathematics, languages, history, and military strategy by imported European teachers.  Peter spent most of his youth pursing his interest in warfare technology, sailing, and shipbuilding, rather than actively co-ruling with his half-brother. 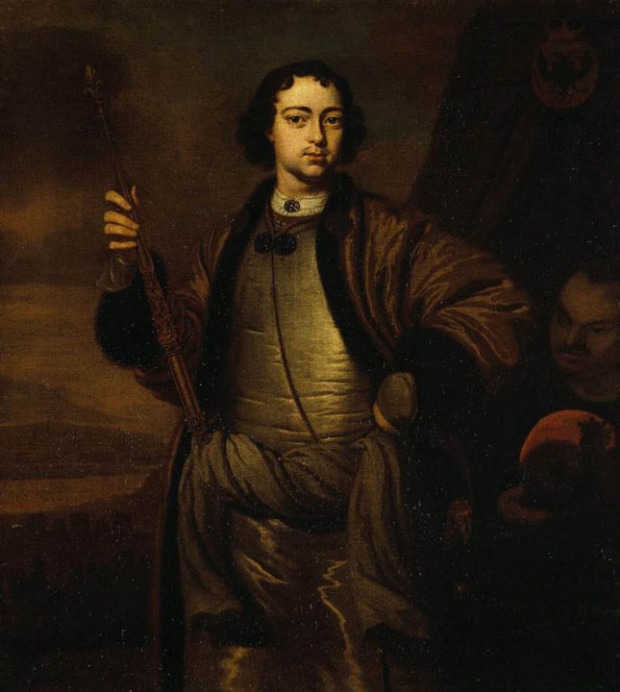 Shortly after becoming sole Tsar in 1696, Peter took a surprising 18 month trip to the Netherlands and England.  He sought out and absorbed everything he could about Enlightenment science and technology.  Protected by a pseudonym, he even worked building ships for the Dutch East India company.  Forgoing the lavish royal accommodations prepared for him, Peter chose to live in a simple wooden house which can be visited today in Zaandam.

After Peter’s impressive “internship” abroad, he brought back new tools, technologies, and ideas to rapidly bring Russia up to speed with the rest of the Western world.  More astutely though, Peter realized that Russia needed more than just technology, it needed a complete paradigm shift in its political and social structure if this modernization was going to be successful. 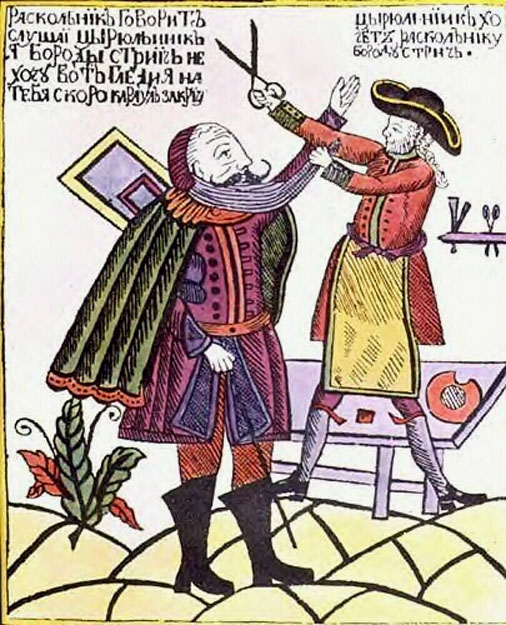 Satirical print in which a barber is going after the beard of an “Old Believer” during Peter’s reign. (Image)

The day Peter returned to Moscow in September 1698, a dozen or so top boyars, who had been running the country in Peter’s absence, came to meet him.  He thanked them, they talked, and then he immediately made them shave off their long beards.  The men stood in shock as each one was shaved.  Later that winter, Peter surprised guests at a banquet by announcing that all men had to be shaved right then and there.   Peter shocked guests at another event but cutting off the billowing sleeves of several boyars’ robes, joking that now they wouldn’t be dragging their clothes through their food.

In January of 1700, Peter decreed that all boyars, government officials, and landowners could no longer wear Russian robes and had to wear Hungarian style caftans.  This was followed up by another decree in 1701 stating that men had to wear French or German styled clothing (i.e. waistcoat, breeches, gaiters, boots & hat) and that women had to wear petticoats, skirts, and bonnets.  If you were in traditional clothes (except for peasants), then you had to pay a tax to enter Moscow.  Men who wanted to keep their beards had to pay a significant tax and had to wear a metal proving they’d paid or else roving government barbers could shave them on the street.  Peter’s fashion reforms were swift, extreme, and met with a great deal of resistance.

Russian clothing at the time consisted of long robes, coats, and boots.  There was almost an Oriental look to this fashion that hearkened to the steppes of Asia and Russia’s distant past.  Because these items restricted movement, Peter though this fashion was entirely impractical.  Beards were also totally out of fashion in Europe and were equated with ignorance; Peter saw that Russians with their silly long beards were the butt of jokes in the Netherlands.  However, for Orthodox Russian, the beard was a symbol of piety and religious commitment.  Loosing their beards was a horror that many Russian men had trouble accepting.  They found back and were very willing to pay Peter’s beard taxes.  Unsurprisingly, non-religious Peter didn’t care and continued to force Western style clothing and manners on the nobles eventually even eliminating the beard tax option for everyone except the ordained. 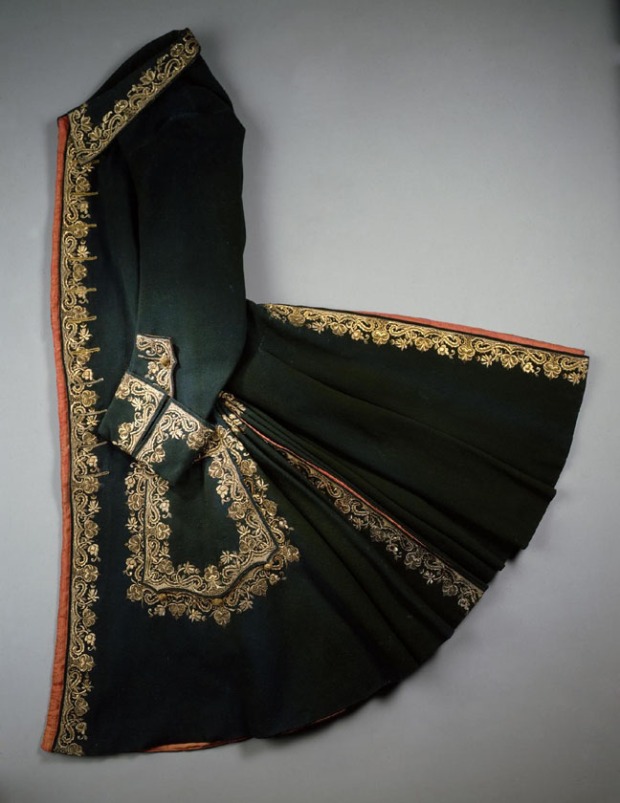 Ultimately the battle wasn’t just about clothing.  Fashion was a surrogate for the political and social structure of corrupt nobles and religious leaders.  Peter gave government positions to men who earned them through intelligence and merit, rather than to wealthy or important boyar families.  Clothing was an easy way to tell who was willing to evaluate new ideas.  Peter also fought against and disbanded the rebellious Streltsy, a order of Russian knights determined to maintain the feudal structure.  He also made the massively wealthy Orthodox Church pay for schools, hospitals, and supplies for the serfs.  Citing their Christian mission, he argued that the Church should be taking care of both the spiritual and physical well-being of their followers, rather than just profiting.

Peter died at age 52.  During his reign, Russia built a Navy from scratch, became proactively engaged in international trade, won major battles against Sweden, reformed its political system, and opened itself to Enlightenment science and technology.  All of these sweeping changes can be attributed to one great man who brought his country from backward isolation to the modern world.  Peter both figuratively and literally, as we’ve seen from his fashion mandates, changed the look of Russia.

If you’re interested in Peter I or Catherine II (both of which are known as “the Great”), I definitely recommend Robert Massie’s biographies of these leaders!  Don’t let the length stop you, these are amazing books about two incredible people.

For the rest of the September ArtSmart Roundtable, check out: