Flowering cactus near the Sea of Galilee

I’ve been back from Israel a month now and have had some time to reflect on the experience.  I’ve been describing my trip as “intense”  – but in a good way!  There are a lot of amazing things packed into this small country and I was nearly overwhelmed by the cultural, historical, and religious wonders I encountered.  I wanted to share with you some of my first impressions.

Desert around Arad near the Dead Sea.

I rented a car to drive through Israel.  It was shocking how beautiful the countryside was and how many environments one finds in such small country.  The gorgeous palm lined beaches turned into futile, flat agricultural plains spotted with grape vines, wheat fields, and banana trees.  Rocky, grassy hills gave way to massive mountains, green valleys, and lakes.  I even saw arid desert mountains populated with wild camels.  Incredibly, you can travel from one landscape to another in a half-hour or so!  I was not prepared for this much natural beauty.

There are layers and layers of history in Israel.  From about 2000 BCE to today, this region was constantly populated.  Waves of great civilizations came and went leaving their settlements, cities, fortresses, temples, roads, and exquisite art in their wake.  The diversity is fantastic; you can find early Israelite, Roman, Umayyad, and Crusader sites.  I loved exploring the extensive and nearly complete archaeological sites.  Of course with all these on-going excavations, you better believe I found a way to get involved… (more on that later!) 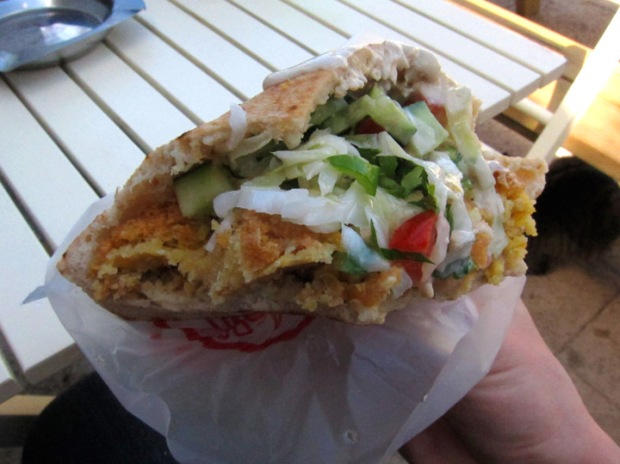 Pretty quickly into the 10 meze salads that came with my first lunch of grilled lamb in Jaffa, I realized I was going to love the food in Israel!  From home-made,  food cart Mujaddara in Akko to grilled fish on the Sea of Galilee, and from creamy beet salads to pickled carrots, I loved the variety and quality of food in Israel.  The real gem of the trip had to be Israeli breakfast – usually a huge spread of prepared salads, vegetables, breads and cheeses.  What a good way to start the day!

Golgotha within the Church of the Holy Sepulchre, Jerusalem

In Jerusalem, I stayed at a pilgrim’s guesthouse run by nuns within the old city.  Chatting with my fellow travelers, I met a woman visiting from Japan.  I asked why she had come to Jerusalem.  “I’m Shinto,” she said.  “But there are three world religions centered in Jerusalem and so I know this has to be a holy place!”  The religious importance is absolutely perceptible in Jerusalem.  Whether a practicing Jew, Muslim, Christian or not at all, you can’t help but reverence the events, places, and worship going on around you. 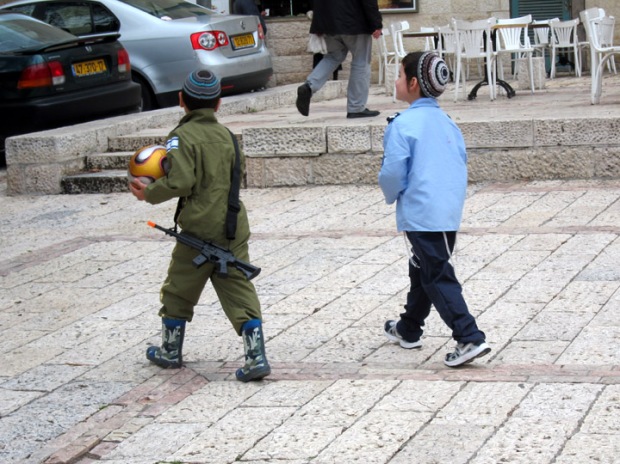 Two boys dressed as a soldier and a police officer for Purim. Security is a part of daily life in Israel.

When I told people I would be visiting Normandy, I got a lot of, “Oh that’s so wonderful” as most Americans consider this region almost sacred because of World War II.  My trip to Amsterdam got a few giggles since most people think of the “coffee shops” and the red-light district. Interestingly, when I said I was going to Israel, I most often heard a surprised “Really?” followed by something about safety.  In all honesty, I felt safe in Israel.  Yes, there were armed soldiers in the streets in Jerusalem and surveillance camera throughout most cities, but as someone who lives in Washington, D.C., I didn’t find this unusual or intrusive.  While Israeli-Palestinian peace talks may remain in the news, I see no reason why that should stop you from visiting Israel today.

I’m looking forward to sharing more from my trip to Israel!