If I had to describe a nation’s capital city, I would think of broad streets, massive administrative buildings, and commercial areas.  I picture public art, decorative architecture, and parks too but its all in the context of the greater metropolis at the heart of the city.  So then imagine how unprepared I was to visit Bern, Switzerland’s national capital.  Instead of a booming, modern downtown, they’ve done an amazing job of preserving the historic old city center.  The heart of the city is gorgeous and the perfect place to spend a day strolling.

The historic soul of Switzerland can be found in its incredible capital city, Bern.

Bern (or Berne) was founded in the 12th century on a small, hilly jetty of land surrounded by the Aare River.  As the population great, the old city expanded right up to the river banks. 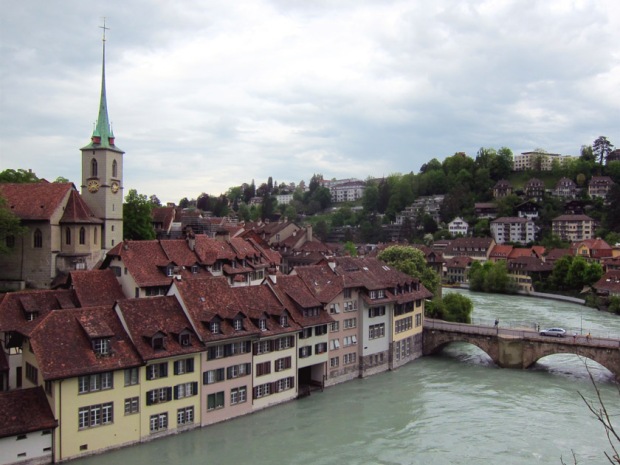 The Aare River bends around Bern

For a medieval town, the city is laid out logically with three main east-west streets that run the length of the old town.  These roads were lined with square flags representing Bern and the Canons of Switzerland.  They added a festive air to the tightly but neatly packed line of historic homes.

View down a quiet side street

Bern’s Clock Tower (or Zytglogge) is fitted with the most advanced astronomical technology of 1405.  It shows the hour, day of the week, day of the year, phase of the moon, zodiac, sunrise and sunset.  To the right, an animatronic jester rings out the time on the hour while bears march below until finally a cock crows and Father Time flips his hour glass. 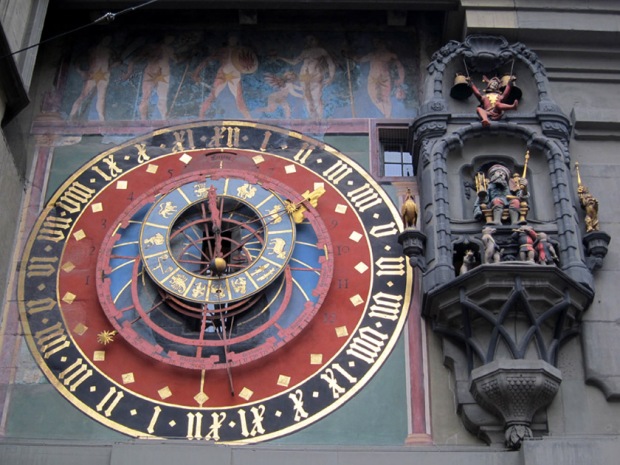 Bern’s Clock Tower (or Zytglogge) with its animatronic Father Time

The public fountains of Bern are elaborately decorated and each include a human figure at the center.  These eleven fountains date to the 16th century and range from allegorical figures like Justice to characters like Samson and finally to fantastic creatures like a Warrior Bear.

The Marksman Fountain (or Schützenbrunnen) and in the background, the opposite face of the Zytglogge.

Bern’s Cathedral, or Münster, is Gothic but has been largely stripped of its interior decoration during Protestant reforms.  Amazingly, the Last Judgement Tympanum and the surrounding statues around main portal have survived.

The life-sized figures beside the doors were moved to a museum and replaced with colorfully painted copies.  I always love when churches do this, because it’s helpful for picturing the original portal which definitely included painted figures. 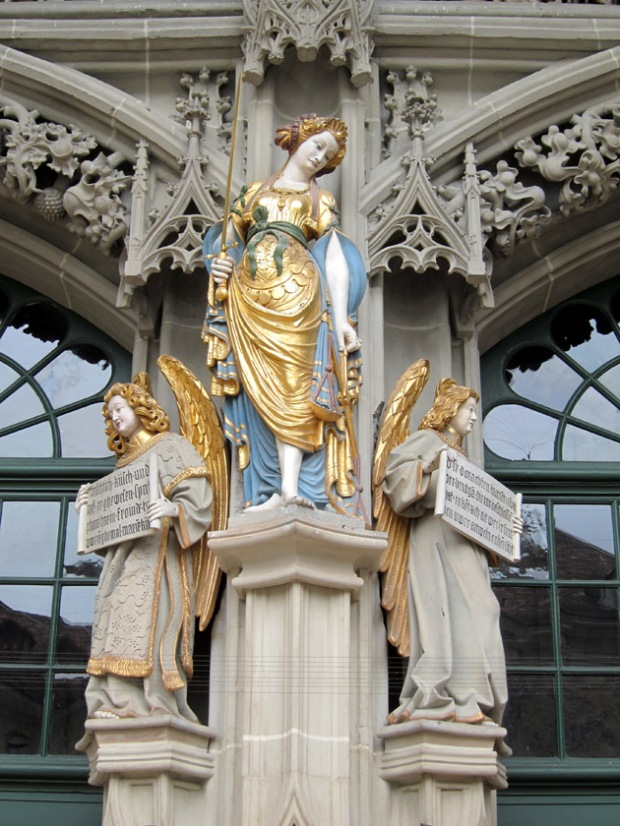 Angels on the facade of Cathedral of Bern (Das Berner Münster).  These and the other life sized figures are replacements as the originals were moved to a museum.

It’s easy to forget how old some of the buildings are in Bern because they are so well maintained.  The upper floors seemed to be residences and had cheerful “mini-garden” window boxes of bright flowers.  Walking through the arcaded sidewalks, past shops and professional offices, I occasionally found dates like 1695 or 1701 proudly carved over a lintel or on a door.

Elegant iron door knocker on a house built in 1695.

Bern was a surprise and a delight.  The historic old town is really charming.  I found myself walking down the same streets twice (once on each side) just to make sure I didn’t miss anything but maybe also to linger a little longer in this magical time capsule.  It’s no wonder Berne’s historic center has been named a UNESCO World Heritage Site.

A heraldic lion and the Bear flag of Bern.