The monthly ArtSmart Roundtable brings together some of the best art-focused travel blogs to post on a common theme.  This month we are discussing Contrast.  You can link to all the ArtSmart contributions below. For February we welcome a new team to the ArtSmart group – Lydian and Pal of Art Weekenders! They are based in Amsterdam and love sharing ideas for art and culture based getaways.  We’re so excited to welcome them to the Roundtable! 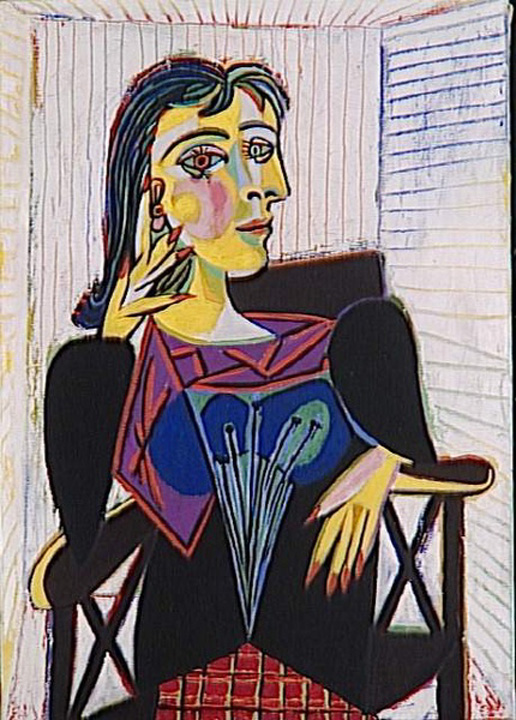 Contrast is a fundamental concept in art.  Artists use colors, movement, shapes and volume to add contrast and build emotion in their work.  But what happens when an individual internalizes the concept of contrast and applies it to his or her own career?  Pablo Picasso was an incredibly gifted artist but I have always been struck by how deliberate and thought-out his works were.  Wanting to explore new creative approaches, Picasso radically switched between several styles throughout his career, each one unique and captivating.  That to me is his genius and a real lesson in Contrast.

Pablo Picasso’s father was an art teacher at the School of Fine Arts in Malaga, Spain.  Beside the technical aspects of painting, his father must have taught Pablo how to analyze a piece and think through the creative process because very early in his career we see him studying his contemporaries in France.  Pablo arrived in Paris around 1900 at the tail-end of the Impressionism boom.  We can see that he is soaking in the styles around him but also building on them.

A bit like Toulouse-Latrec he made dance hall advertising posters with quick sketch-like lines: 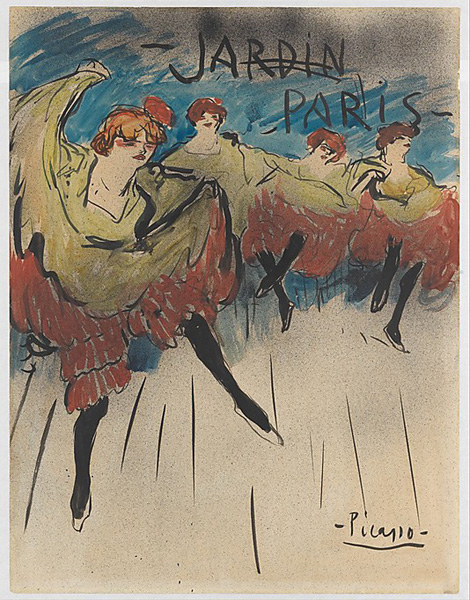 Combining Renoir’s happy people and crowded compositions with the dark night-life of the Belle Epoque, he created this scene: 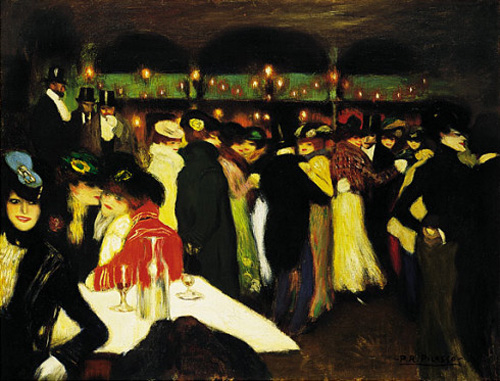 Many figures in Picasso’s “Blue Period” are reminiscent of Velasquez and Manet’s beggars and street prophets.  Also like these artist, the brushwork in these portraits is rich more realistic.  There is evidence in the “Old Guitarist” that Picasso reworked and started over multiple times on a single canvas as he struggled and worked through a composition. 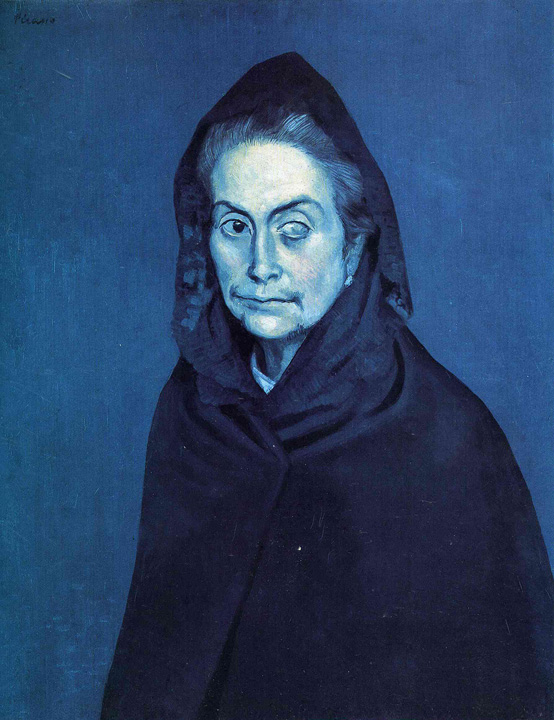 As the story goes, Picasso saw an exhibit of African masks and was inspired by their sharp angles and broad surfaces planes.  Pulling elements from Cezanne’s work, he incorporated these stylized faces into an abstract and flattened world “Les Demoiselles d’Avignon” completed in 1907.  Elaborating on this design concept, Picasso along with Georges Braque developed an art movement called Cubism.  They removed objects from a single point of view and presented viewers with a 2D yet multidimensional image.  It was a radical departure from the tradition of Western Art and received mixed review.  Picasso continued to explore Cubism for decades allowing this movement to evolve as he did.

Analytical Cubism is the most radical form of this movement.  Images are extremely abstracted such that the subject of the painting may not be apparent.  Generally a very neutral palette is used. 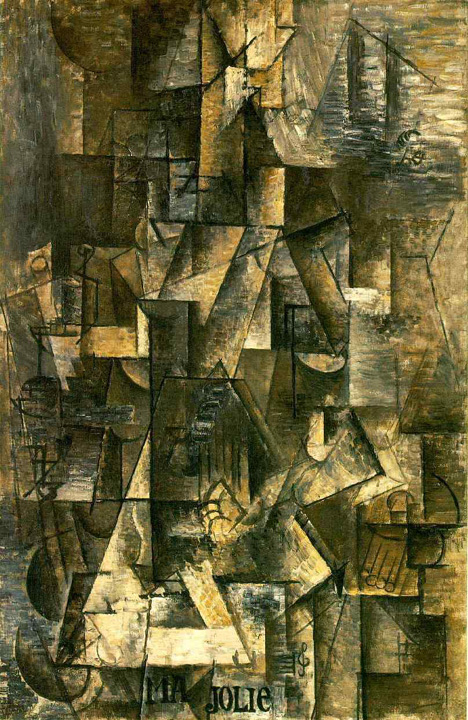 Later Synthetic Cubism pulled back from the extreme abstraction of earlier works and used more recognizable shapes. The subject matter became more clear but was still handled in a deeply stylized and angular way. 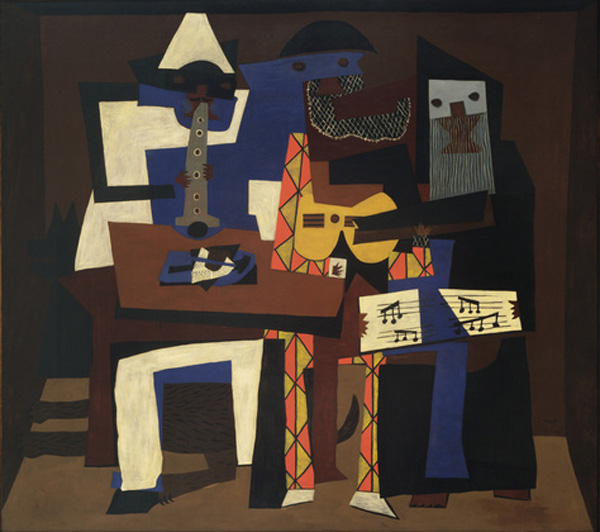 Picasso continued to play with Cubism incorporating bright colors and curved elements.  At times Cubist took on elements of Surrealist Art which was a great fit given that both movements look for meaning beyond what is natural or immediately apparent. 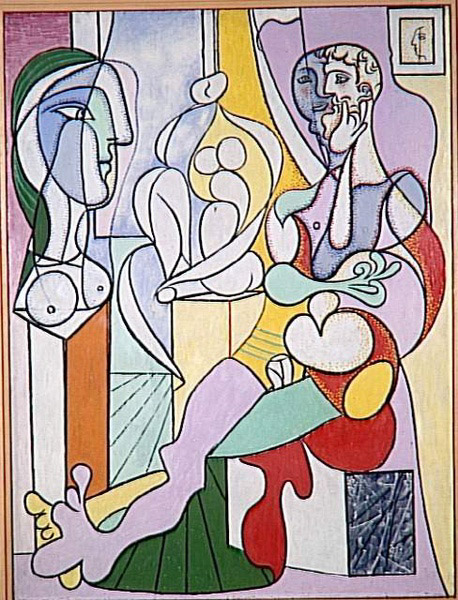 Following WWI, Europe and its art community felt traumatized.  Picasso moved away from the mechanical and abstracted toward a more classical style.  His paintings in this period were populated with thick women with classical features and ancient Greek clothing.  Figures were placed on beaches or peaceful neutral environments.

The eyes of this woman have a very sculptural quality as if Picasso were reproducing an ancient bust: 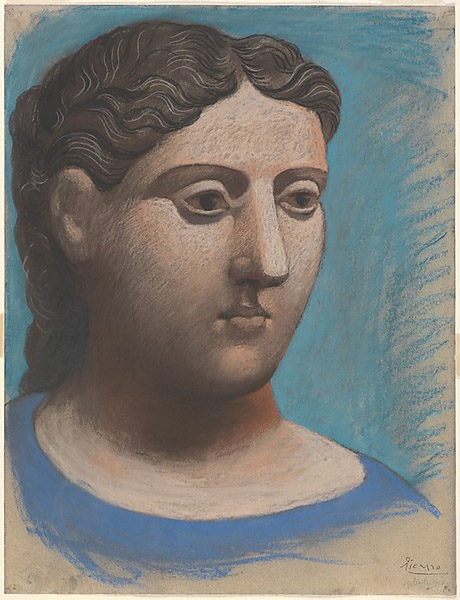 Picasso, empathizing with worn torn Europe, was drawn toward warm, humanistic subject matter like a loving mother and child: 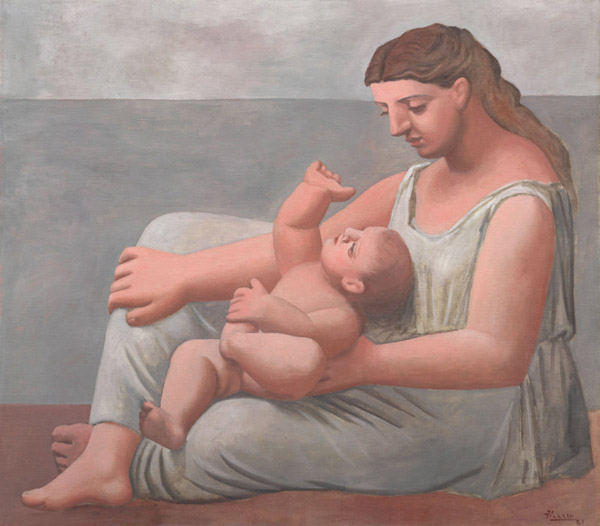 Picasso spent must of his later life along the French Riveria.  Reflecting the joy of beach life, his works were filled with happy fawns, women and dancers enjoying the sun.  His style during this time condensed significantly with simple lines and colors  transmitting the figures, scenes and emotions.  There is less Cubist influence in these pieces because the paucity of each image required more deliberate representations. 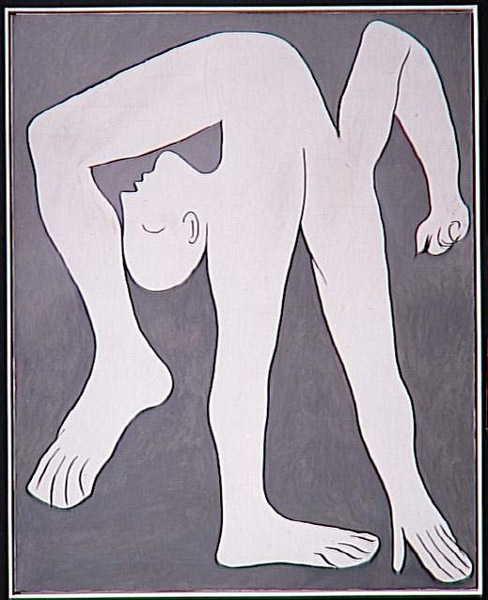 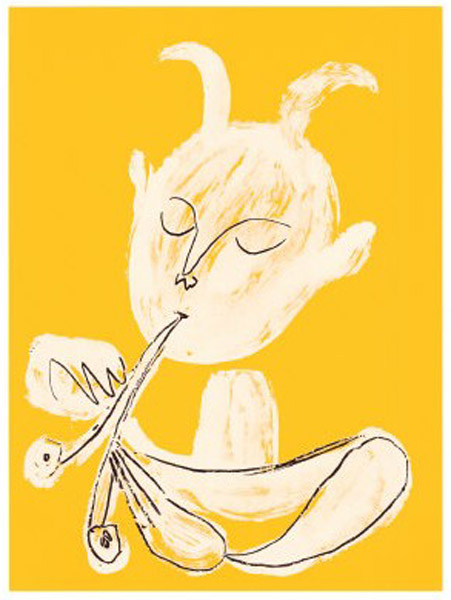 During this period, Picasso selected a subject and drew it over and over, each time condensing more and more of the image.  You may be familiar with the Bull series done in 1945, but Picasso also drew figures and his lover Françoise Gilet in this way. 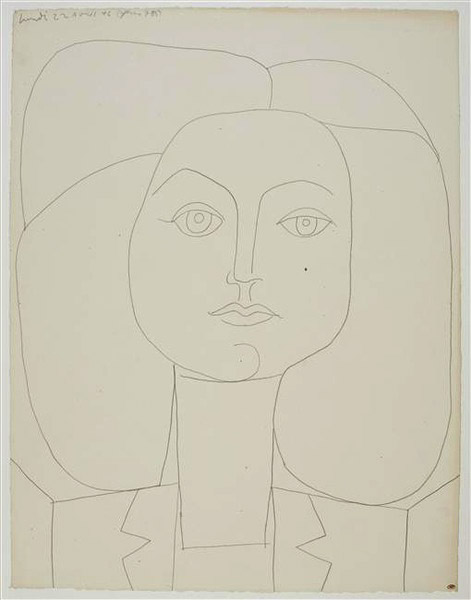 While Picasso had worked with sculpture throughout much of this career, he worked with the Galerie Madoura to create many ceramic pieces that were reproduced in limited editions. 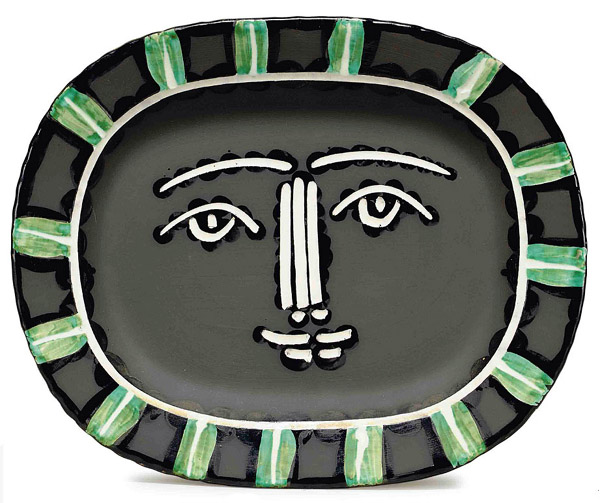 Where to See Picasso’s Work

There are Picasso Museums in Paris, Malaga (his birthplace) and Barcelona.  Since Picasso was incredibly prolific, you can see examples of this work at most major metropolitan museums.  Given this vast contrast of styles he used, you shouldn’t be surprised if something that doesn’t “look like a Picasso” actually is by him after all!

For the rest of the February ArtSmart Roundtable, see: