Admittedly, my Friedrich Wahle research has been on the back-burner since I found the print version of my painting.  I’ve mostly been trying to monitor the auction market where a few of his paintings surface every year.  Interestingly, I happened across a television appraisal of a Fritz Wahle painting on Kunst & Krempel (Art & Stuff), the German version of Antiques Roadshow.  It’s a well executed scene of a couple sharing a few private words at a dinner party which I think the show entitled “Eavesdropping”.  While the image is beautiful, it was the frame that really got my attention – it is the same as the one on my Wahle!

As many times as I watched and rewatched the appraisal, I was convinced the frames matched perfectly.  The frame on the TV show is a brighter gold (perhaps repainted?) and didn’t appear to be as damaged as the frame of “The Discourse“.  The corner decorations, the mid-side scalloped heart designs, the interior textured area and the other motifs all corresponded between these two frames. 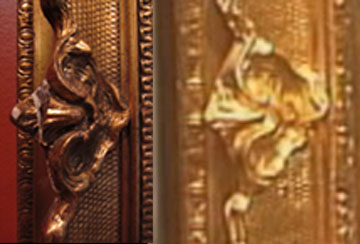 “Eavesdropping” appears in the weekly humorous journal Fliegende Blatter in the first week of August 1905.  Sadly, I don’t think the etching does justice to the figures in this scene who have subtle and well-rendered expressions in the painting.  While the painting seems smaller than “The Discourse” in the appraisal, it still takes up almost a full page in Fliegende Blatter. 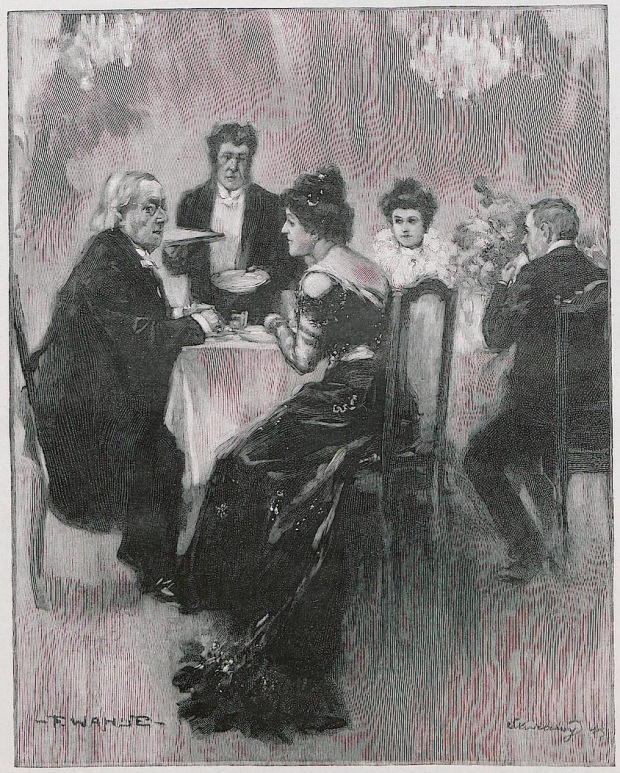 Friedrich Wahle’s “Eavesdropping” as it appeared in 1905 in Fliegende Blatter.

Close up of Friedrich Wahle’s “Eavesdropping”, as seen on Kunst and Krempel.[1]

Even with this finding, it is still not easy to date the frame.  At first I wondered if a batch of Wahle paintings were framed at the same time and sold, for example at the end of the year.  Given that “The Discourse” appeared in print in 1901, this doesn’t seem as likely.  Alternatively, frame styles may not have changed considerably from 1901 to 1905, so the same shop may have handled both works after they appeared in Fliegende Blatter and were put up for sale. I also wondered if both paintings were purchased as a lot by a dealer upon Wahle’s death in 1927 and therefore framed similarly.

Most Wahle paintings come to market without a frame, with a simple one or even a replacement frame, so its difficult to judge what would have been the original, contemporary frame.  While I don’t speak German, I think the woman at the start of the appraisal mentions something about her “Granmama” so the painting may have entered her family very early, suggesting that this is an original frame.  By extension then, “The Discourse” is also in it’s original, albeit damaged, frame.

**Update: See comments below.  Given the owner’s timeline, this likely is the original 1901 frame.***