The Martin Luther King Jr. Memorial opened to the public today and will be dedicated in Washington, DC next weekend.  Information and concert tickets can be found on the official event website: Dedicate the Dream.

26 Aug 2011 UPDATE: The official dedicate date has been moved to an undeclared date in September or October due to the arrival of hurricane Irene in DC this weekend.  Friday and Saturday morning events are still planned.

At the time this was proposed, the World War II memorial had just opened and there was some groaning in DC that the Mall was too crowded for anything else.  To me, the National Mall is both an expansive green space and a record of our history, culture and heroes.  I am glad a nice spot of the Tidal Basin was set aside to honor MLK Jr. specifically and in a broader sense the US civil rights movement.  (An African-American History and Culture Museum is slated for the Mall in 2015 which is good because the only Museum remotely dedicated to the same subject matter was in Anacostia before – way, way off the beaten tourist path.)

One main features of the MLK site is a large bolder cut and opened in the middle called the “Mountain of Despair”.  The removed piece is set closer to the water and is called the “Stone of Hope”.  It is 30 ft tall and features a standing portrait of MLK emerging from the stone with arms crossed.  Flanking around the tidal basin, out from the Mountain stones, are slowly tapering stone walls engraved with quotes by Martin Luther King Jr.  Given the position of the monument on the Mall and its open lay-out, this seems like a very accessible and engaging space.  I see people picnicking and chatting in eye-sight of MLK Jr. along the Tidal Basin.

You get a good sense the site from this fly through video produced by the National Memorial Project Foundation:

As you would imagine, there has been the obligatory criticisms of the statue: it was made in China by a Chinese man, it’s not a good likeness, he looks confrontational, whatever.  The critique that I find the oddest is that the statue is too tall.  In fact, the MLK figure is just about as big as his nearest neighbors on the Mall: Lincoln with pedestal is ~30.5ft and Jefferson with pedestal is ~25ft.  MLK seems so much larger because he is not in a temple like those other two which defines a visual space and makes the figure seem smaller.  Likewise, you can go right up to him and so your viewing perspective changes to a more extreme angle.  I will concede that the stone block itself is pretty huge when viewed in the round.  For scale, here’s how some of my favorites on the Mall compare: (Gandhi is technically in Dupont Circle in front of the Indian Embassy but I thought he belonged here.) 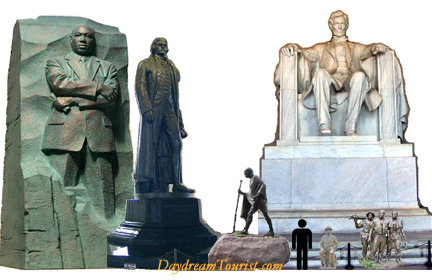 Martin Luther King Jr. statue size relative to some of the notable DC memorial statues and a 6′ tall person which gives a better sense of scale.

To me the most powerful memorials are personally engaging and this often means that the elements exist on the viewer’s level.  For example, imagine how awesome it would have been to put a life-size statue of MLK Jr. on the steps of the Lincoln Memorial!  You could stand next to him and look out over the Mall while reading his “I Have a Dream” speech.  At least the newly constructed MLK Jr. Memorial lets you wander through his quotes and stand amid the literally and metaphorically looming mountain stones.

I’m looking forward to visiting DC soon to see this new Memorial in person and hope you get a chance to check it out too!