One year from today, I will be watching the Opening Ceremony for the 30th Olympiad!  I should say I will be watching at home and not in London, but I will be excited nevertheless.  I love the Olympics: the drama of competition, the national pride and the awe-inspiring athletic performances.  I also think it is a really great opportunity to show off for the host nation (you got it mostly right Beijing) and to rejuvenate the host city (look what it did for Barcelona and Athens!).  Since the summer Olypmics requires such a face-lift for the host city, I was not exactly excited to hear London had won.  My worry at the time was that there was no way a city with an incredibly congested  downtown and limited free space for construction could pull it off.  (The same thing goes for New York City, etc.)   Checking in with London’s progress one year out, I think they’re going to pull it off but as usual it will require planning on the part of visitors and patience.

I suppose it should have been obvious, but London has a lot of athletic and exhibition venues already and did not need to build a lot more.  What the planners have done is use as many existing spaces as possible to I think a good result.  For example, the tennis competition – of course, it will be at Wimbledon.  Other sites include the Wembley complex (badminton, soccer), North Greenwich Arena (gymnastics), Earls Court (volleyball), the Lord’s Cricket Ground (Archery), Hampton Court Palace (cycling), and ExCeL’s five arenas (Boxing, Fencing, Judo, Table Tennis, Taekwondo, Weightlifting, Wrestling).  Even people who do not want to brave London can catch soccer matches in ManU’s stadium, Glasgow, Newcastle and Cardiff.  In London, several temporary venues are being set us such as Greenwich Park (Equestrian),  The Royal Artillery Barracks (Shooting) and elsewhere.  Rowing is sadly not on the Thames but 25miles north near Windsor Castle. The major construction has been for the Olympic complex which will contain the Stadium (ceremonies, track & field), Athletes Village, Aquatic Center (Swimming & Diving), Basketball Arena and a few others.  This whole complex is located 5-6 miles from the City Center near the Statford tube stop.  Major compliments to the organizers too for a VERY cool marathon route.  So all in all, things are location fairly concentrated without shoving in building or rolling over neighborhoods.  Visitors will be heavily depended on public transport, which brings me to my second point…

City lay-out from the 2012 Organizers 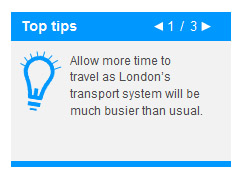 Getting around London, to quote the Bard, “ay, there’s the rub.”  On top of London’s vehicle congestion laws/fees, there will be no public parking at the venues.  The official 2012 web-site basically advises not to even think about driving to London events.  One nice plus for Olympic attendees is the Travelcard for rides through zone 1-9 in London which accompanies your event ticket.  My instinct is to try and walk between cluster of venues but a lot of these distances are 6-8 miles which is really not feasible, meaning the Underground and buses are going to be very much at capacity even with extra service.  There will be still longer transit times if you’re staying in a hotel outside the city.  Beyond the time need to take public transport, the organizers are advertising considerable walks from the tube to the venues and airport-like security lines once you get there.  Frankly, like any Olympic games, plan on leaving your hotel in the morning, spacing out your activities throughout the day and do not plan on getting back before dinner.

And if you live in London, at some point between June 27 and Aug 12 you may want to take a little vacation outside the city.  You might even be able to rent you flat for a nice profit!