Including Local Celebrations in Your Travels

The monthly ArtSmart Roundtable brings together some of the best art-focused travel blogs to post on a common theme.  This month we are discussing Festivals!  Take a look at all the great stories at the bottom of the page.

Hand-made items by children decorate the 1849 Hungarian Army memorial.  The soldiers honored with this monument died during the 1849 Revolution which is celebrated on Hungarian National Day on March 15.

I’ve seen some amazing places in my travels and have always had excellent timing.  I’ve met the right person and ended up getting a private castle tour or been in the right place and got swept up in religious procession.  Somehow recently I just happened to be in town during a national holiday or religious celebration.  But unlike Carnival in Rio, Venice or New Orleans which are internationally know parties, the festivals I found were mainly for the locals.  Seeing how a community celebrates with their own customs, foods, and crafts makes for an incredible cultural experience.  It has convinced me that if you really want genuine travel, then you have to include local celebrations in your travel plans.

Easter Vigil in the Gothic Cathedral of Amiens, France

At a quarter to 10pm on a frosty Saturday night in March, I joined a group of eager French Catholics on the steps of the Amiens Cathedral.  I happened to be in town for Easter and was eager to attend the vigil service in such a stunning setting, even if it meant wearing about 4 layers of sweaters under my coat.

Saints on the exterior of the Amiens Cathedral during the Easter Vigil mass.

The mass begins with a ceremonial fire just outside.  It was absolutely breath-taking to see the shadows from the flames dancing through the Gothic portal carvings giving life to the stony Saints.

I know better than to take pictures during mass, but the candlelight and architecture was so beautiful that I couldn’t help taking just one…

The worshipers then moved inside in a candle light procession.  It was stunning!  The architecture was even more beautiful in the low light.  I’m really happy I had a chance to see the incredible interior this way.

The gorgeous vaulting of Amiens Cathedral by candlelight

In the end, nothing evokes the mystery of medieval piety like candlelight.  I couldn’t help but think of the centuries of faithful who had passed through this cathedral.  Eventually the lights were turned on, but the opening portion in the dark gave me chills.

On March 15th, Hungary celebrates the Revolution of 1848 in which they tried to gain independence from the Austrian Empire.  The official festivities include public speeches and reading of patriotic poems followed by a classic street fair.  But when I heard that Hussar re-enactors participated in the events, I changed my plans to make sure I was in Budapest for National Day! 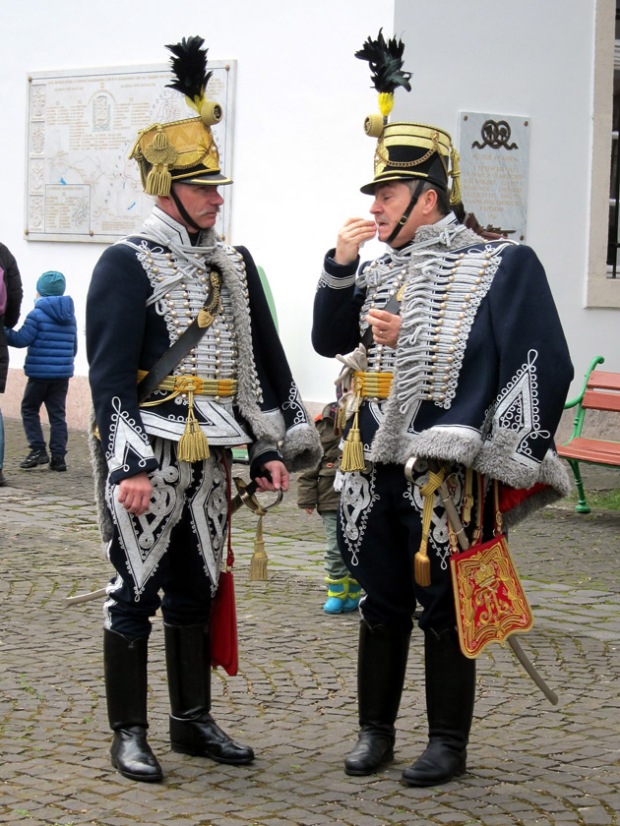 I’ve always liked historic military officers’ uniforms.  They are formal and aristocratic beyond what would practical in battle but still retain an element of folk design in the details. 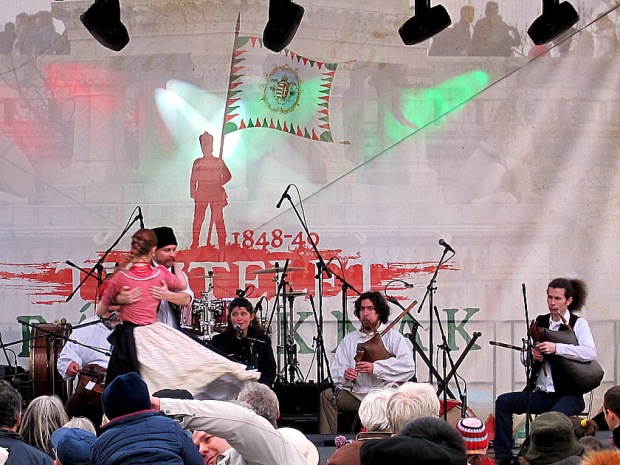 Folk dancers and musicians on Castle Hill on Hungarian National Day.  You can see the Fisherman’s Bastion faintly through the curtain.

The festival itself was a lot of fun with traditional music, food, and crafts.  Some of the dances must have been really well-know.  For example, on the secondary stage, the lead dancers pulled in audience members who joined in without missing a step. 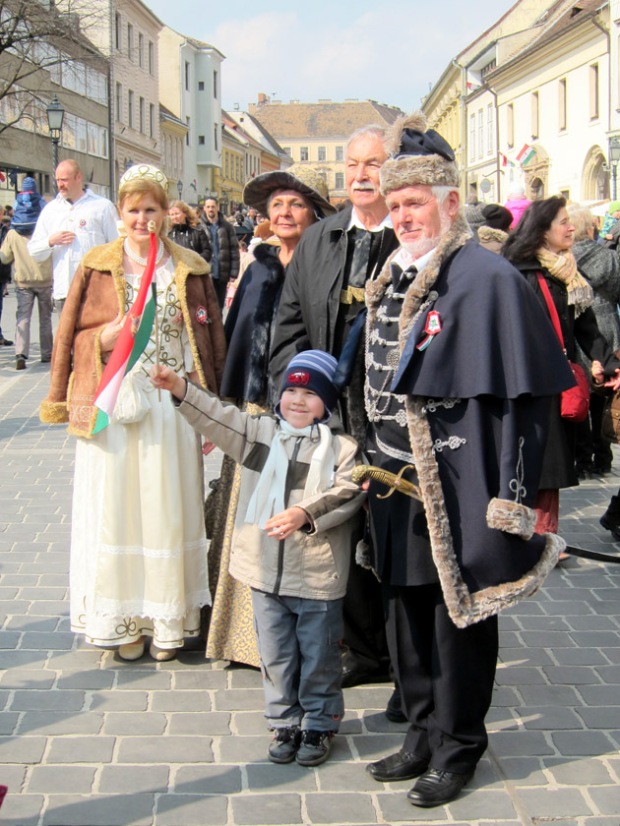 A boy energetically waves a flag with period re-enactors on Hungarian National Day.

The street festival on Castle Hill turned out to be so much fun.  It felt like half of Budapest was there!  Just about everyone was wearing a red, white, and green Hungarian cockade.  I got the feeling that the crowd was very proud of their heritage and their country which is especially poignant considering Hungary’s history over the last 30, 60, and 100 years.  I wasn’t exactly sure what to expect but was so happy I came back to Budapest for National Day.

Between the military presence, rival religious groups (including Christian priests of different denominations fighting in the Holy Sepulchre!), and the tiny real estate of this ancient city, it’s easy to feel like Jerusalem is an uncomfortably intense place.  But by visiting during Purim, I got to see a much more jovial atmosphere!  While a religious holiday, Purim is known for being a lot of fun.  Celebrations include story-telling with audience participation, dressing up in costumes, and lots and lots of eating and drinking. 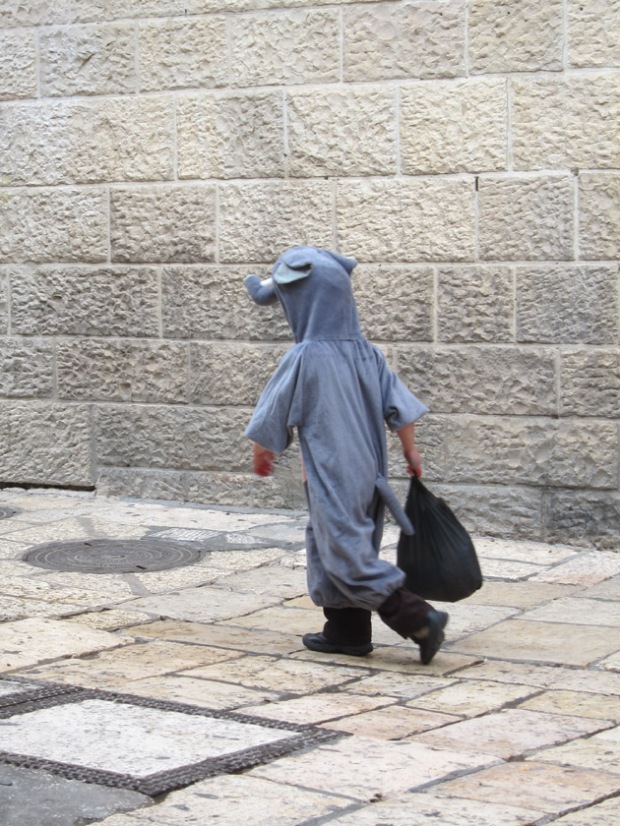 A child in an elephant costume hurries home with some groceries for Purim.

I definitely noticed the children in the late afternoon dressed up as animals and biblical characters.  As the evening progressed, adults in various states of costume met up to eat, laugh, and eventually stumble a little on the walk home.  It was like Halloween in the US but without the spooky element.

For one night only, there were pirates, leprechauns, and Mexican sombreros at the Western Wall.

I wish I knew a little more about the traditions of Purim before my visit, but it was fun just taking it all in!

A man in a costume blows a rams horn over the grave of King David on Purim.

In the end, it was great to see a joyful, almost silly side to Jerusalem.  Purim was an unexpected treat and great timing again on my part.

Now that I’ve realized how great local festivals and holidays are, I need to make sure my next trips include a few.  Holy week in Seville, Spain, the Cherry Blossom Festival in Tokyo, and the Royal Tattoo in Edinburgh, Scotland are a couple that interest me.  What festival are you interested in seeing?

For the rest of the June ArtSmart Roundtable, check out: