Nothing captures the artistic spirit of an era like a historic home.  Through a coherent assemblage of architectural elements, furniture, and decor, you can get an absolute understanding of a period’s design principles.  I recently visited the Driehaus Museum in Chicago which presents within its luxurious rooms the evolving American decorative arts of the Gilded Age.  This mansion is also a startlingly beautiful oasis in the modern business center of Chicago and definitely worth a visit!

The three-story mansion was built between 1879 – 1883 for banker Samuel M. Nickerson.  Fashionable members of Chicago society, he and his family hosted parties displaying their extensive art collection.  Upon Samuel’s retirement in 1900, they sold the house to George Fisher who lived there until 1917.  During this period, the house interior was redone to suit changing decorative trends.  Following the Fishers, the house was purchased as the headquarters for the American College of Surgeons and was not restored for use as a museum until 2003.   Richard Driehaus, the museum’s namesake, is actually a modern philanthropist and not a former resident of the mansion!

Driehaus Museum surrounded by the skyscrapers of modern Chicago.

The restoration of the interior and exterior of the mansion is phenomenal.  Nickerson family pieces or at least period decorations and materials were used to recreate the former home.  In addition to preserving this historic mansion, the Driehaus Museum seeks to celebrate American decorative arts from the lifetime of this home.  As a result, the rooms vary in style to capture the multiple iterations of decorations and objects that once were there.

The main second floor hallway is walled with marble.

Great amounts of marble, alabaster, and onyx were used to decorate the walls of the front entry and the main landing of the second floor.  This visual opulence, to the point of excess, is what prompted writer, satirist, and critic Mark Twain to declare the second half of the 19th century, “The Gilded Age”. 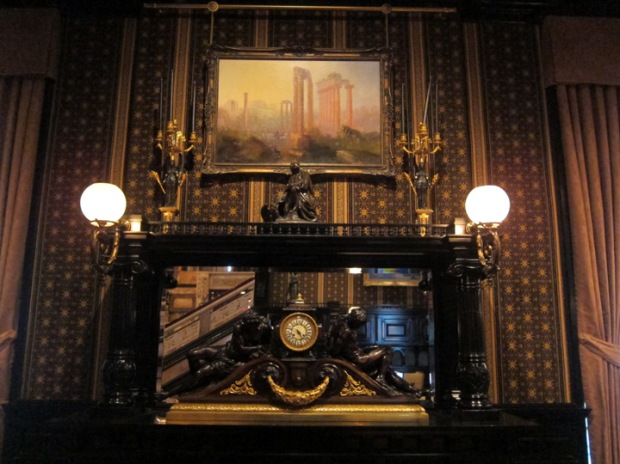 Onyx fireplace mantle in the Library

The dining room has extensive carved wood paneling in the Victorian style.  Likewise, the table and chairs are thick, weighty, and highly ornamented pieces.

The front parlor has more wooden paneling but has been updated with later art glass lamps and an airy painting. 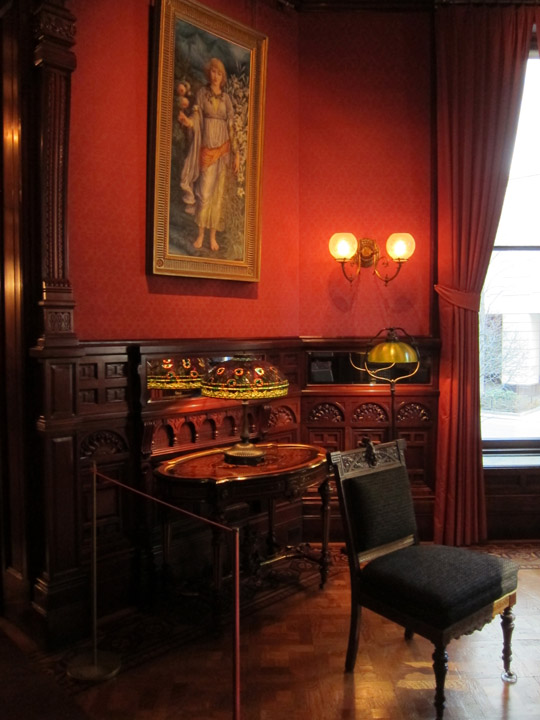 The music room fittingly features a Pre-Raphaelite painting of angels playing an organ.  The ornamented frame reminds me of the Aesthetic Movement which sought out beauty for beauty’s sake.  By comparison, the Rococo clock, vases, and candelabras seem older.  This mixing of styles is authentic and is part of what makes exploring the museum so much fun. 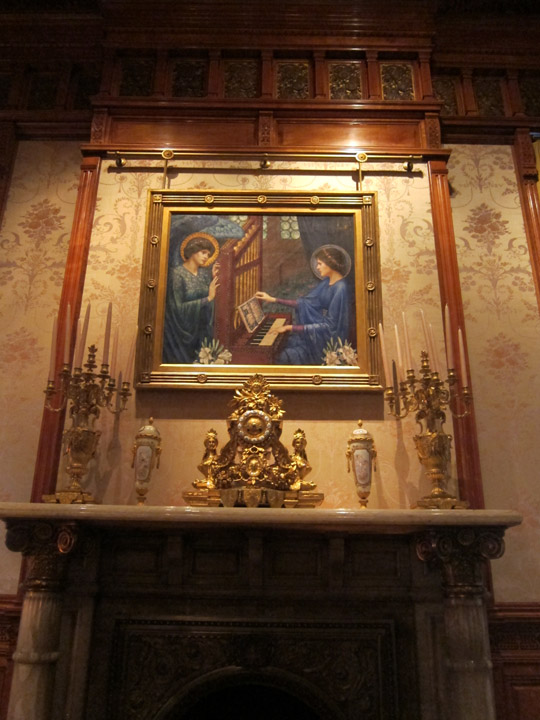 Fireplace in the music room.

The Nickersons used their back salon as a small art gallery.  Adding to the impressiveness of the space, they installed a massive Tiffany & Company dome ceiling.  While their art collection is now with the Art Institute of Chicago, visitors can still marvel at the glass ceiling which is a impressive work of art on its own. 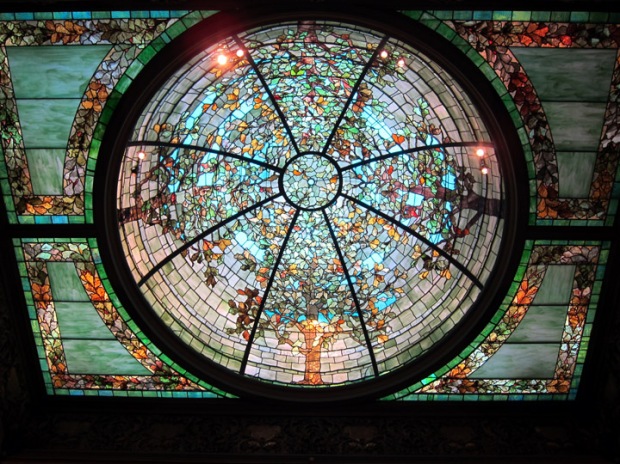 The American Midwest developed its own unique arm of the Arts & Crafts movement.  Decorative ceramic manufacturers (like Rockwood in Cincinnati), furniture makers, and glass shops adopted the originally British aesthetic and softened it by focusing on simplified forms and balanced designs rather than over organic ornamentation. 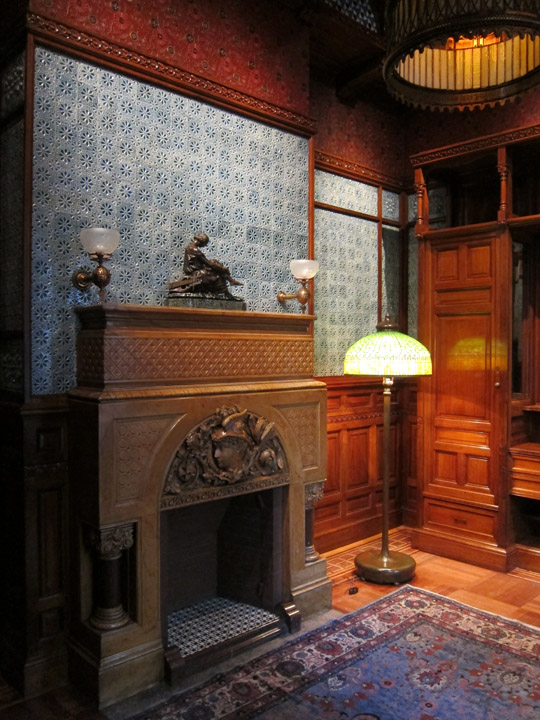 Ceramic walls in the front room

Pottery and ceramic art became very popular American Arts & Crafts decorations.  Elaborate tiles were used to cover walls.  Here in this front room from the Driehaus Museum two patterns of blue tile were used.  The partially glossy finish contrasts nicely with the wood furniture and decorative elements.  In the context of the whole room, it is easy to forget about the tiles, but they are very beautiful on their own.  I loved the second tile pattern that was used to decorate below and between the windows.  The shape, depth of relief and subtle blue glazing effects was lovely.

While looking at one of the upper bedrooms, I found the original bathroom and realized that it was also tiled.  Since this bathroom had been converted into the modern men’s restroom, I got one of the museum staff to take me in to look at the dark green-blue tiles.  (Later I found the women’s restroom which had red tiles.)

The Driehaus museum seeks to present the range of decorative styles that one would have seen in a fine Guilded Age mansion and so several of the upstairs rooms feature very American Art & Crafts furniture. The fireplace below is an exquisite example with inlaid tiles both around the fireplace and in the cabinetry.  While using wood to construct the fireplace was already a stylistic departure from previous design concepts, the construction, artistic details, and symmetry are beautiful.

The museum also has a collection of art glass by Tiffany & Company.  You can see a set of tulip vases on the fireplace mantel in the picture above.  There are also lots of stand-alone pieces which are fantastic and unique works of art. 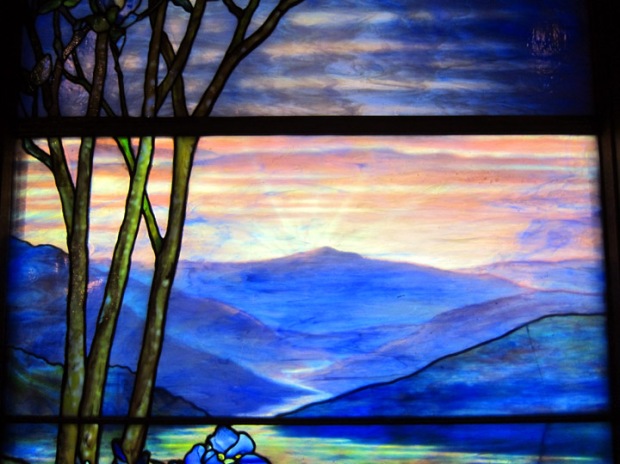 Portion of a Tiffany & Co. window on display at the Museum

This nautilus shell lamp is also a fitting place to end our walk through the Driehaus Museum because it is a transitional art piece.  The patterned glass shade foreshadows the emergence of the Prairie School movement in Chicago which emphasized geometry integrity and strong lines.  Likewise, the undulating silver and mother of pearl lamp base suggest the emergence of Art Nouveau. 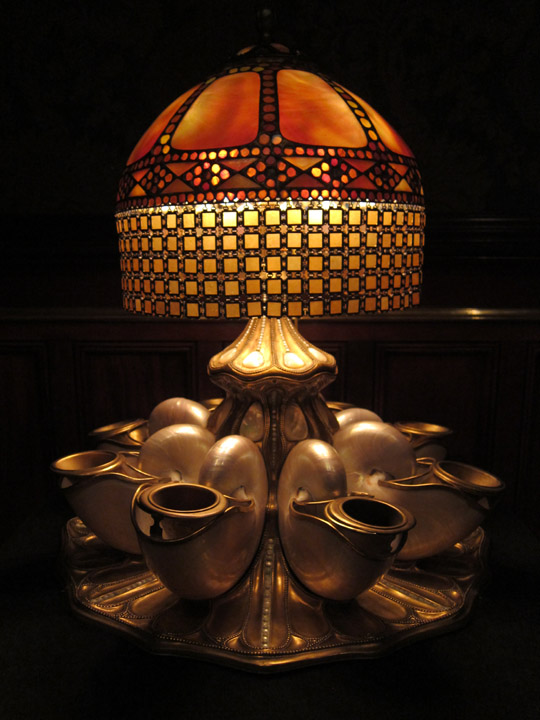 Tiffany glass lamp with a nautilus shell base.

The end of the 19th century was certainly an amazing period for decorative arts in America.  The Driehaus Museum does an amazing job capturing this dynamic period with its collection of historic rooms and exhibited art pieces.  For more information about the Driehaus Museum, including special exhibits, events and opening times, see their website.