The God of Mozia, Sicily

The monthly ArtSmart Roundtable brings together some of the best art-focused travel blogs to post on a common theme.  This month we are discussing great sculpture!  You can find links below for the group’s posts this month.  The summer heat has got me thinking about Sicily and so I’m going to introduce you to a phenomenal, ancient piece that I happened to stumbled across on a secluded island (really!).

Foundation of an ancient house on Mozia, Sicily.

On the Western tip of Sicily, between Marsala and Trapani, is the small island of Mozia protected by a natural lagoon.  It is a totally unassuming place, only accessible by a little water taxi, but has quite a past.  The Phoenician city of Mozia (or Motya) was founded in the 8th century BC taking advantage of the island’s natural defenses.  The city was a profitable trading community for centuries but later, regional conflict between the Greeks and Carthaginians spilled over and ultimately led to its destruction in 397BC.  The citizens must have known the end was imminent because they buried their greatest treasure – a white marble statue – in advance of the invasion.  In the 20th century, he was discovered, excavated and nicknamed, “The God of Mozia”.

The architectural ruins on Mozia are nice and include a massive outer wall, paved main streets, domestic spaces and the foundations of a large temple. The museum on the island displays a collection of small Phoenician and Greek items which in general are early and relatively primitive in design.  There are some interesting masks believed to be related to a funerary or human sacrifice ritual (but more on that later!)  In this unassuming old museum, I never expected to see a sculpture of such incredible skill and style – a sculpture that in many ways defies art historical conventions. 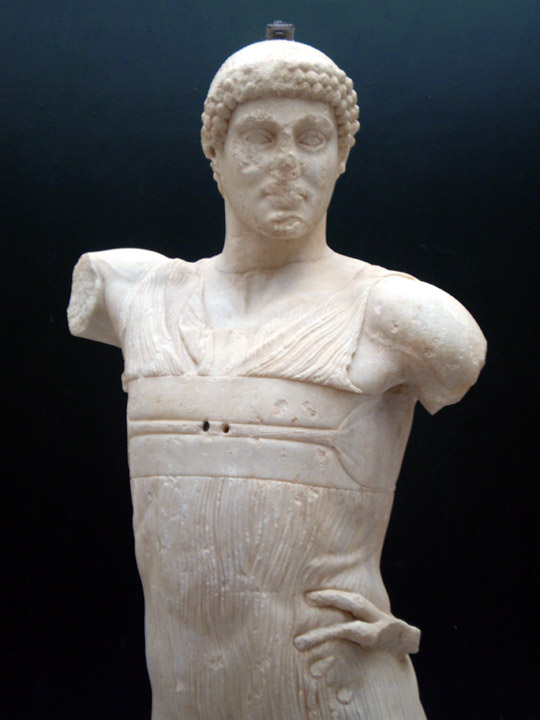 The God of Mozia, circa X BC on display at the Mozia Archaeological Museum, Mozia, Sicily

The God of Mozia would have been about 6ft tall with his now lost feet.  The young man stands in an exaggerated and provocative contrapposto stance.  He wears a thin, diaphanous tunic which is held tight against his chest with an elaborate belt.  His hand digs into the flesh of his hip with shocking realism. 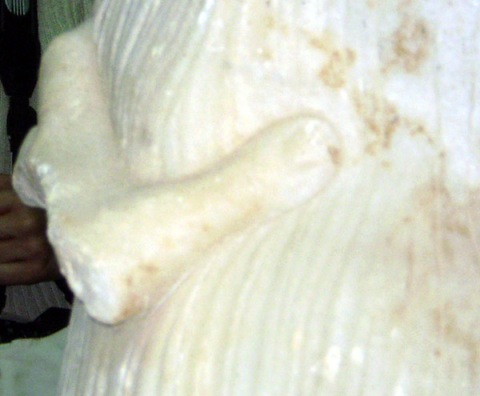 Close up of the hand squeezing the hip of “The God of Mozia”.  (Sadly my camera in 2007 while in Sicily didn’t do so well with indoor art close-ups.)

The execution of the sculpture has all the sophistication of the Classical Greek style but with a unique twist.  Males tend to either be nude or robed in more sturdy tunics while women had more ephemeral robes.  The God of Mozia has a very atypical, animated pose.  Figural extremes were usually reserved for Bacchus and his wild followers.  Even then, these expressive pieces do not appear until the height of the Classical Greek period where The God of Mozia is much older. 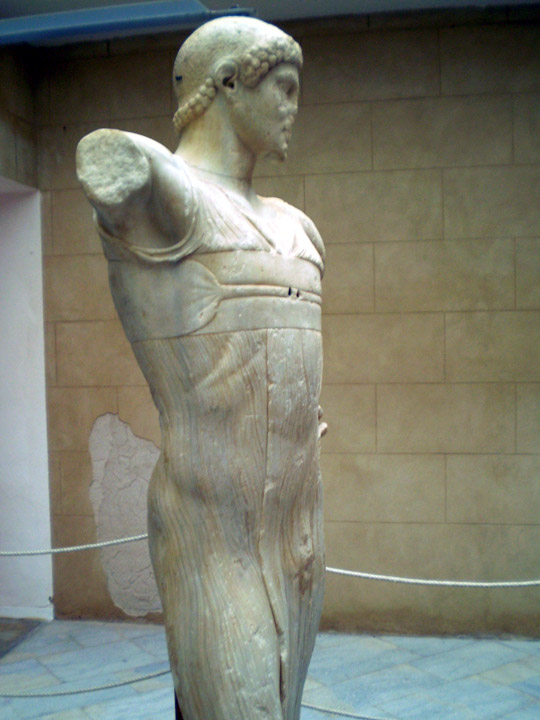 As well as the body of the figure is executed, the exaggerated almond eyes and the tight bundles of hair around The God of Mozia‘s face is reminiscent of archaic Greek pieces such as the Kouros Boy.  The cap of his head is rough and likely would have been adorned with an extemporaneous crown.  The practice of mounting separate head-pieces or other adornment on marble statues was in practice in the pre-Classical period of Greek sculpture.  You can see two example below.  Incorporating elements of archaic and classical Greek sculpture, The God of Mozia is a true cross-over piece. 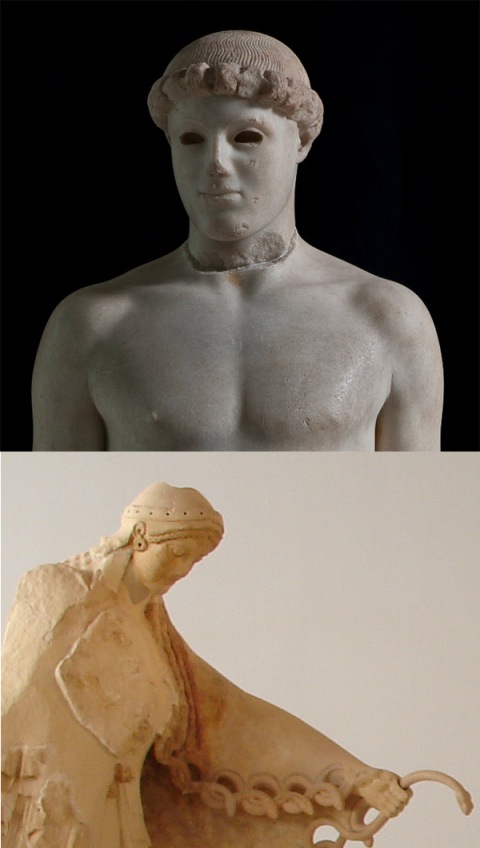 (above) The Kritios boy of 480 BC and (below) Athena of the Gigantomachy from the pediment of the Archaios Naos Temple, Athens circa 525/515 BC would have been adored with attachable headpieces and jewelry. (Photos: here & here)

How are we to interpret this figure and more importantly who is he suppose to be?  Since Phoenician sculptors were not nearly this talented, it is believed that the figure was either commission by Mozia of Greek sculptors or was stolen from the Greeks and brought to the island.  I tend to think the statue was commissioned thus explaining the unique mix of masculinity and femininity, and classical and ancient styles which seems more disjointed than the work executed by the Greeks.  Given the deliberateness and care with which it was buried and the lack of any other art of this caliber on Mozia, I think this was in fact a cult deity figure.  This figure is also commonly believed to be a charioteer given the style of belt he is wearing.  I also really like the theory put forth by the Getty that he is a ritual dancer.

Upper back of The God of Mozia (photo: Peter Elman, flickr)

Amazingly, the God of Mozia has left his island and is on tour right now!  He and other treasures of Sicily are on display at the Getty Villa in Los Angeles until Aug 19th, 2013 as part of the 2013 Year of Italian culture.  You have about 2 months left to see him in the US before the young man slips back to his quiet, forgotten island just of the coast of Sicily!

For the rest of the July ArtSmart Roundtable, see: