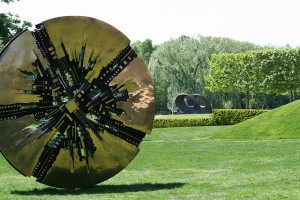 On the University of Chicago campus last month, I stumbled across Arnaldo Pomodoro’s Grande Disco.  It is a looming, industrial and futuristic disk that seems to be splitting open along several seams.  When examining the details up-close, you half expect the thing to open further and start talking.  (That’s how a science fiction movie involving modern outdoor art would begin.)

I was drawn to the sculpture for its design but also because I recognized it.  I thought I saw this in Milan, what was it doing next to a Medical School building on the University of Chicago campus?  Turns out there are five other “Grande Discos” throughout the world each made within the same general time frame and varying slightly in design.  Located in urban, commercial and green spaces, the pieces are enhanced by the environments they have been placed into.  See what you think of these outdoor installations.  Personally, I think the Grande Disco does the best in the two extreme environments: the rolling green sculpture park and in the shadow of North Carolina skyscrapers.

Grande Disco (1980) in front of the Banca Populare in the Piazza Meda, Milan (Photo: Bri74, Flickr) What’s not to love about a shimmering disc and its circuitry-like innards in a public park?  I like the contrast between the vast and organic versus the engineered look of the disk.  (Think opening scene of 2001: A Space Odyssey.)  Conversely, just as idealized human figures match the refined order of a Renaissance palace, the disk matches the cool modern commercialism of the business center in NC.  Skyscrapers and minimalist office building resonate progress and profits as executed by the non-human corporation.  In this context then, the disk is opening to reveal some innovative technology without the obvious hand of a human creator.

To appreciate a copy of Grande Disco, you really do need to get up close and look through the cracks of diverging metal and see the veins of emerging cubes.  It’s essential then not to put it on a pedestal and certainly not to construct a moat around it.  The Darmstadt and Theatro Strehler disks follow the old philosophy of public art installation – convey importance through esteemed placement away from the viewer.  This may work for triumphant equestrian statues but not for modern pieces whose foreignness is their intrinsic beauty.   Lastly, while Chicago and Piazza Mede do let you get close to the disk, the placement is still not perfect.  There is not enough room on that U of C patio for such a big, interesting piece and there are other things that would look better with the surrounding architecture in Piazza Mede.  As you can see, a little bit of spatial context can make a big difference.